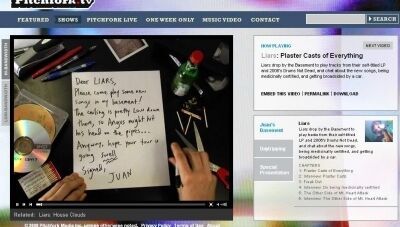 Essentially an extension of the hugely successful Pitchfork website, which attracts millions of hits from music lovers for its in-depth, hugely respected reviews of music from across the spectrum, but particularly for its role in championing independent music, so far the channel is pretty basic: following bands around, broadcasting exclusive shows, old concerts and the like.

Small potatoes you say, but the potential is huge: a well-respected site with good industry contacts could do big things with interesting behind the scenes interviews with upcoming (and established) bands, showing old concerts etc by catering to a burgeoning market niche for music content long vacated by MTV and VH1 et al.

VBS.TV, Heavy and Current are other great examples of this new field. Because the of the small costs associated with producing and broadcasting this sort of content the niche programming doesn't need (or want) mainstream fodder to capture the huge audiences to justify the massive media buys that are needed to support larger media operations. More choice for the various cultural tribes out there. Micro-media outlets if you will.