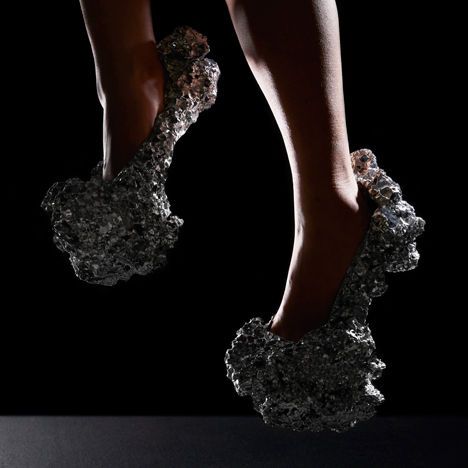 The Meteorite Shoe is Designed to Resemble Chunks of Space Rock

Fashioned from aluminum foam, the space shoes are intended to resemble slabs of rock from outer space. In order to make the shoe as realistic as possible, the designers took a trip to London's Natural History museum, where they investigated the shapes and textures of previously discovered space rock.

The designers injected the aluminum -- which is most commonly used to insulate luxury automobiles -- with "gassing agents" while it was in its molten state, creating a "pumice-like material." They then applied CNC technology to the foam to achieve the irregular formations. While the insides of the shoes are lined for user comfort, the foam exterior (which is 90% air) stretches to cover the shoe's heel, and thus keep up the illusion that the wearer is floating on chunks of rock.