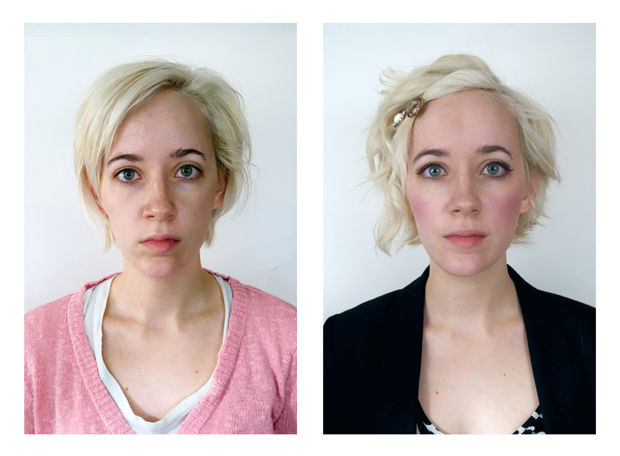 Vasiliki Marapas — December 19, 2014 — Fashion
References: melkeiser & featureshoot
Share on Facebook Share on Twitter Share on LinkedIn Share on Pinterest
For her latest series, 'Becoming Mel,' Chicago-based photographer Mel Keiser took a series of paired self-portraits. The first photo was taken upon waking, and the second after she'd readied herself to face the public. More than a "Before-and-After" beauty feature, Keiser's series explores the ways in which we conceive of our own identity.

The differences between "private Mel" -- the sleepy-eyed, messy-haired woman who squints into the camera with a sneer on her face -- and "public Mel" -- the cheerful, confident woman who stares back at us with clarity and certainty, are performed in Keiser's daily routine. We recognize this fact because we, too, have a routine in which we "become" ourselves. Keiser says it best when she says, “The second picture is taken after I begin to feel like ‘Mel,’ usually after my physical self begins to reflect what I believe ‘Mel’ looks like.”

The project reveals a sense of anxiety over the fractures in our own identity and the way it is perceived by others.
6.7
Score
Popularity
Activity
Freshness
View Innovation Webinars