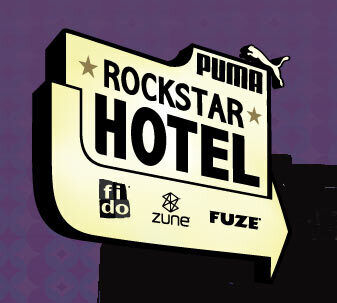 PUMA Rockstar Hotel and the Much Music Video Awards (REVIEW)

The red carpet was made beautiful by stars like Girlicious, and made humorous by rappers like Flo Rida and Offishall/Akon. Flo Rida entertained by thanking 'MTV' at a 'Much Music' event. Offishall and Akon entertained by driving up in a city bus. Don't worry about humility, though: the two rappers were accompanied by a couple dozen groupies.

Although the celebrities remain the lure, the excitement for a Trend Hunter like me actually comes from the unique promotional activities, especially in the private parties which cater to celebrities. (Context: I was the kid that collected his favorite advertisements.) Obviously celebrity endorsement has a massive impact on product infection, so innovative companies go to great lengths to infect their products into the limelight.

The evening before the event, we attended the PUMA Rockstar Hotel, which featured an invite only cast of celebrities and socialites. Thanks to our friend Debra at Rock-It Promotions for the party. I found myself most entertained (for different reasons) by Rainn Wilson (Dwight from the Office), Jayde Nicole (2008 Playmate of the Year - Picture 6) and New Kids on the Block. (Random Fact: On the red carpet, Sum 41 wore New Kids on the Block t-shirts.)

The PUMA Rockstar Hotel was hosted on several floors of the Gladstone Hotel, a boutique 1889 hotel with 37 artist designed rooms (Featured on Trend Hunter HERE.)

This night, the hotel was decorated with the promotional art of the events sponsors. Notably, Microsoft Zune, PUMA, Pioneer and FIDO stood out.

Microsoft also had a full stage and party room set-up for people to play Rockstar on XBOX. Nice. Picture 9 shows the Playmate of the Year playing Rockstar guitar. Photo courtesy of Jeff Roach)

The main (promotional) attraction was the exclusive PUMA room (Picture 3). This balloon filled room featured edgy new puma shoes suspended from the ceiling. PUMA was also giving away free shoes to its VVIP guests. The PUMA concierge outfitted me with a pair of silver PUMA golf shoes which would no doubt you some attract attention, unless you golf with Flo Rida. More importantly, PUMA shoes adorned the feed of several rockstars by the end of the night.

For a music enthusiast like me, the Pioneer room (Picture 4) was a unique opportunity to play around with digital turntables. The added functionality of digital tables make them a worthy upgrade from the Technics SL-1200s that have dominated the dj landscape since 1972.

The FIDO room (Picture 5) lacked working artists, turntables, and free shoes. However, it did have two things the other rooms lacked: dogs with wigs and free martinis. You know how much we like Dogs With Wigs, so that was a welcomed attraction:

Then it was the next day.

Then my head hurt.

Then it was later in that day and time for the after-party.

The after-party, was hosted by Perez Hilton (Picture 7) with Simple Plan playing in the background. FOUR Trend Hunters were in attendance, as shown in Picture 8... But two of them are elusive, do you know who they are? You will.

There were also a number of Canadian bands rocking it up, and a couple nostalgic legends like Melanie C. The party was held at Revival, another Toronto hotspot with some history. Revival, now a nightclub, was formerly a church; an interesting place to close the almost religious celebration of music.
2.6
Score
Popularity
Activity
Freshness
Get Trend Hunter Dashboard

25 'The Office' Finds
From Goofy Celebrity Portraits to Superhero Impersonations