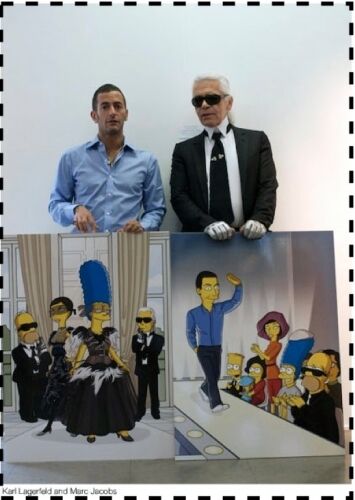 Marc & Karl on the Simpsons

Bianca — May 11, 2008 — Pop Culture
References: community.livejournal & kanyeuniversecity
Share on Facebook Share on Twitter Share on LinkedIn Share on Pinterest
First Karl Lagerfeld was featured in Grand Theft Auto IV, and now the Chanel designer has been forever immortalized as a Simpson, alongside fellow designer Marc Jacobs. Both are known for their quirky personas, and Matt Groening did a fantastic job capturing their colourful characters.

The images are actually from a spread in Harper's Bazaar, "The Simpsons go to Paris with Linda Evangelista" which hit newsstands in July 2007, around the time the media was abuzz about the Simpsons Movie. While it's a little old, it's still awesome, especially since less than a year later, Karl has been recartoonized.

People either love Karl, or hate him, but no matter what the opinion, there's no denying that Lagerfeld is a legend. How

How long before he appears on Family Guy?