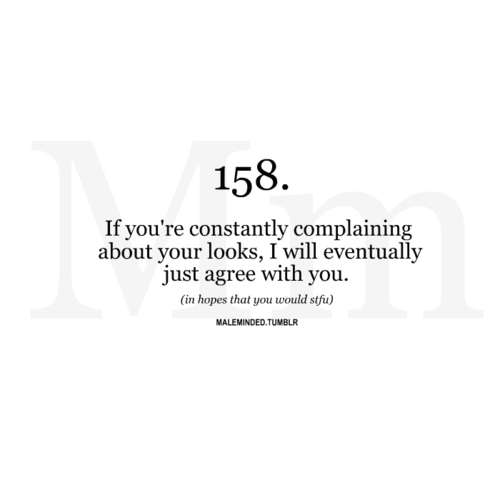 The Male Minded Tumblr Illuminates the Thoughts of Men

Jason Soy — November 11, 2011 — Pop Culture
References: maleminded.tumblr & nikolleeex.tumblr
Share on Facebook Share on Twitter Share on LinkedIn Share on Pinterest
There’s been a major insurgence of inspirational quote websites popping up on the Internet, but the Male Minded Tumblr is a different beast altogether. Combining insight into relationships, witty remarks, outrageous humor and agreeable levels of chauvinism and chivalry, the man-centric blog is both an entertaining and cerebral read.

Littered throughout the Male Minded Tumblr are square black and white quotation graphics that denote the thoughts of men, and rules that they should incorporate into their belief system. With sayings like “When she insults herself, not disagreeing is agreeing” and equations like “self-shot + Facebook - shirt = tool,” it’s hard to find grievances with the blog.

For those still unconvinced about the validity of the Male Minded Tumblr, it should be noted that Cosmopolitan Magazine reblogged one of MM’s quotation images on their official Tumblr.
6.2
Score
Popularity
Activity
Freshness
Access Advisory Services