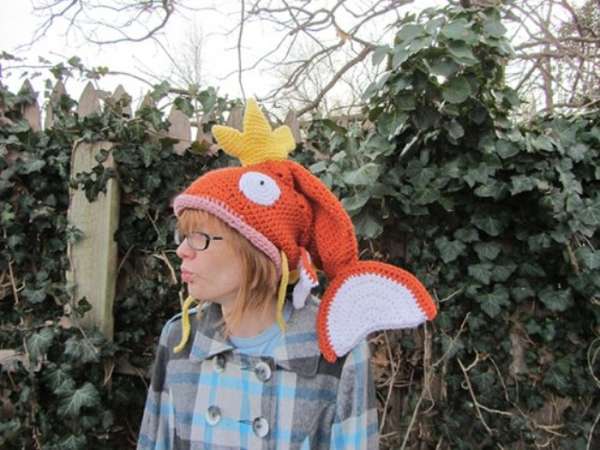 The Magikarp Crochet Hat Puts is Both Ridiculous and Functional

Michael Hines — February 25, 2013 — Fashion
References: etsy & walyou
Share on Facebook Share on Twitter Share on LinkedIn Share on Pinterest
Yes, this is a Magikarp crochet hat. For those who didn't watch Pokemon, Magikarp is essentially the lovable loser of the series.
His ridiculousness is well known by fans of the show. Despite his popularity, Magikarp never got much play when it came to fan-made clothing and accessories. Luckily, Etsy merchant Savannah Mitchell, owner of the store Corlista, has designed a hat to change all of that.

The Magikarp crochet hat copies the shape of the hapless Pokemon, turning it into a functional and fun head warmer. The hat is hand-knit by Mitchell and is only available as a custom order and has a delivery time of between four to six weeks. In addition to the hat, Corlista also features a ton of knit Pokemon toys and pieces of original artwork.
3.9
Score
Popularity
Activity
Freshness
Get Better and Faster