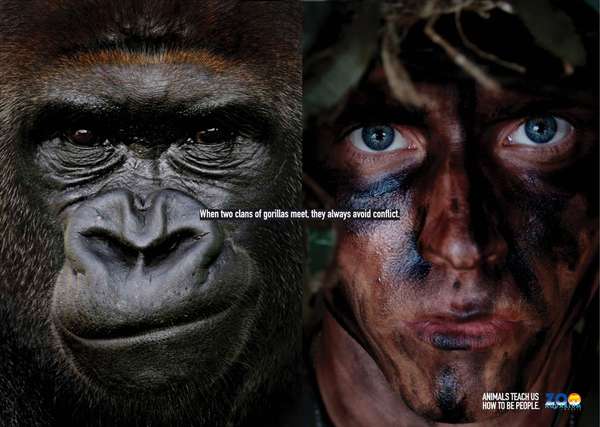 Madrid Zoo: How to Be People

Ayman — May 28, 2008 — Marketing
References: adsoftheworld
Share on Facebook Share on Twitter Share on LinkedIn Share on Pinterest
This new ad campaign for the Madrid Zoo shows us what humans can learn from the animal kingdom. The print ads, which were created by Sra Rushmore United ad agency, Madrid, show a side-by-side portrayal of an animal and a human with a unique message explaining what we, as humans, can learn from the depicted animal.

Messages include: â€œElephants never abandon the elderly;â€ â€œA lion never uses his strength to humiliate another;â€ â€œWhen two clans of gorillas meet, they always avoid conflict;â€ â€œBears don't discriminate when their young are female;â€ â€œWhen a dolphin finds a hurt dolphin, he helps it stay afloat,â€ and â€œThe only difference between panthers and leopards is color.â€

If animals try to avoid conflict, why do we as intelligent and evolved beings seem to seek it? After all, according to Braun, the only difference is a 5 minutes shave.