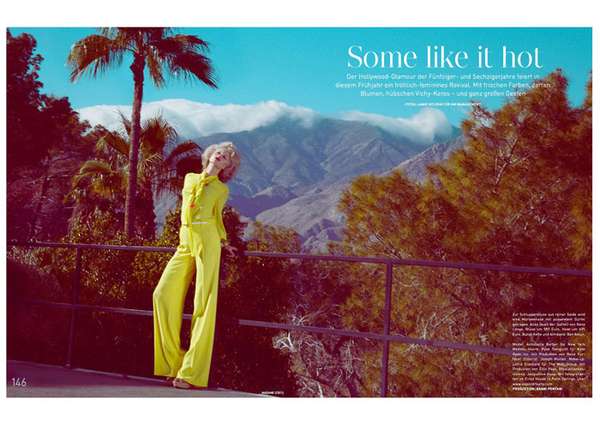 Meghan Young — January 30, 2012 — Fashion
References: madame.de & fashiongonerogue
Share on Facebook Share on Twitter Share on LinkedIn Share on Pinterest
The Madame Germany 'Some Like It Hot' editorial pays tribute to Marilyn Monroe. There have been many homages to this iconic sex symbol the last couple of months, most of which star actress Michelle Williams, but this photo shoot takes a luxurious turn to set itself apart. Still sexy and glamorous, the backdrop of a Hollywood mansion gives it an extra bit of leisure and splendor.

The Madame Germany Some Like It Hot editorial was shot by photographer Jamie Nelson for the magazine's February 2012 issue. Starring model Annabella Barber, who was styled by Hanni Pontani, the shoot has a 50s vibe. Barber is clad in pieces from fashion houses such as Prada, Dolce & Gabbana, Miu Miu and Hermès. Her teased blond hair and bright red lips finish the looks.
5
Score
Popularity
Activity
Freshness
Get Trend Hunter Dashboard