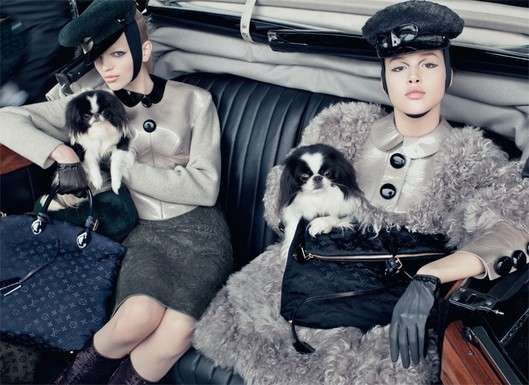 Corinne Guirgis — May 22, 2011 — Marketing
References: blog.myfdb & fashionista
Share on Facebook Share on Twitter Share on LinkedIn Share on Pinterest
It is the puppies and not the models who steal the spotlight in the Louis Vuitton Fall 2011 campaign shot by Steven Meisel. The Japanese Chins (or spaniels) were cast in the print ads alongside six models and they are certainly giving them each a run for their money. The best part? The pups had to compete for their spots in the high-fashion ad campaign just like the models. According to WWD, who leaked the campaign yesterday, “dozens of canine hopefuls turned out for the casting, with only seven pedigreed pairs making the cut.”

Alongside the adorable pups, accessories that steal the shoot include vintage cars, slightly fetishistic fashions resembling those featured in the Fall 2011 runway show, high-heeled rubber boots, officer caps, driving gloves and, of course, several bags from the collection.

The Louis Vuitton Fall 2011 campaign is tintilating and captivating, only it is the pups who will win you over more so than the models.
5.3
Score
Popularity
Activity
Freshness
Access Advisory Services