Toy Balloons as Air Travel
Next
Set of
Related
Ideas 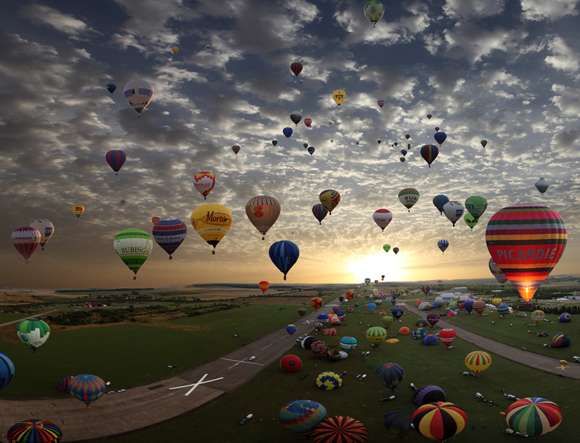 "Last week 329 hot air balloons set off into the skies for the largest gathering of its kind – the Lorraine Mondial Air Balloon Rally, held in Chambley France," Wejetset says. "Seeing one balloon in flight is beautiful, but seeing this many is awe-inspiring. Luckily the Flickr community caught it all."

It's astounding what a social photosharing community like Flickr has done for photojournalism. Prior to Flickr, we were limited to discovering other parts of the world through photographs taken by trained and assigned photojournalists, images captured through a minute number of lenses and shared through meticulously filtered and edited publications.

As the Flickr Lorraine Mondial photo group demonstrates, we now have access to an unlimited amount of images from different perspectives, different techniques, and varying filters of creativity. Just look at these hot air balloons -- we don't just get to look at one small spread in a travel section of a magazine, we have the ability to sift through hundreds of these images, only a small portion of which are in the Flickr Lorraine Mondial photo group. Amazing!