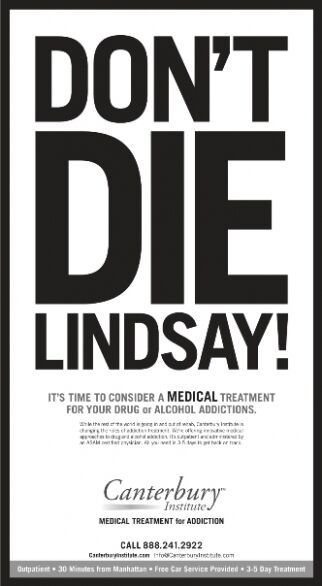 Bianca — September 28, 2007 — Pop Culture
References: adage
Share on Facebook Share on Twitter Share on LinkedIn Share on Pinterest
Lindsay Lohan has literally become the poster child from rehab clinics. The young celeb has been in and out of detox centers in the last year. She has finally gone public with her treatment for alcohol and drugs, no longer attributing her absence from the limelight to treatment for "exhaustion."

A New York company used the celebrity to boost their campaign for rehab center, the Canterbury Institute. In huge, block letters the poster has "DON'T DIE LINDSAY" slashed across the top followed by "It's time to consider a medical treatment for your drug or alcohol addictions."

In smaller print, for those you can't make it out, it reads: "While the rest of the world is going in and out of rehab, Canterbury Institute is changing the rules of addiction treatment. We're offering innovative medical approaches to drug and alcohol addiction. It's outpatient and administered by as ASAM-certified physician. All you need is 3-5 days to get back on track."

I wonder how Lohan feels about it.

"While my first impulse is to shake my head, I think Jugular Co-Founder and Creative Director Jeff Griffith gets near to the truth," AdAge reported. "In the press release, he says, "This category is incredibly difficult. You can't approach addicts with the 'Imagine your life clean' approach. That doesn't work.'

"If he'd stopped right there, he'd be 100% correct. Unfortunately, he continues, 'The only thing they fear is death -- physical death, death of their job or death of their family. These ads talk to that.'"

Looking at the video, it's apparent Lohan has had a lot of fun in her young life. It's images like these that make drugs look appealing -- let's hope this new campaign is effective.

The celeb was supposed to be let out of her Utah clinic this week, but it looks like plans changed after her mother's recent visit to see her daughter. The Ireland Online said, "Lindsay Lohan's rehab stint in Utah will not be coming to an end any time soon, according to the actress' mother. Dina Lohan insists her troubled daughter isn't ready to face the world again after spending the past seven weeks at the Cirque Lodge facility in a bid to curb her wild ways."