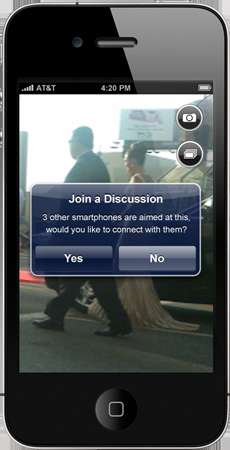 Jonathon Brown — November 5, 2012 — Tech
References: examiner & crowdoptic
Share on Facebook Share on Twitter Share on LinkedIn Share on Pinterest
Thanks to location-based media sharing from San Francisco-based CrowdOptic, smartphone users attending the same event, pointing their cameras at the same place can now share images/video and participate in a live chat with each other. CrowdOptic's technology uses location-based, media-sharing services to track your smartphone to determine where it is pointing. Once identified, it links your phone with other phones in the area watching the same thing. Together, all the phones connected create a cluster of content that can be shared amonsg each other and via social media.

For instance, here is an example of a Flickr stream created to house pictures taken by the studio audience in one of this year's U.S. Presidential debates. This cluster of photos can serve several purposes. It can simply give outsiders a behind-the-scenes look at the debate; but what makes this technology useful is its ability to draw from content generated at different angles, with different points of view to give a comprehensive picture of the event. And in the case of the Presidential debate, the location-based media sharing also serves as a focus study to see which candidate gets the most attention based on the number of cameras pointed at him throughout the debate.

"CrowdOptic technology understands the time and direction smartphones are aimed that we're translating into a 'Crowd Focus' meter," CrowdOptic founder, Jon B. Fisher told Examiner.com. "Won't it be interesting if more attendees are focused on the Governor for whatever reason or if Mrs. Obama commands the most attention of all?"

CrowdOptic technology is also useful for sporting events such as Nascar. Users can point their camera at a part of the track not visible to them and instantly view streaming crowd sourced images, video and commentary. Currently this technology is adapted for specific venues and sporting events and delivered in apps such as Sonoma Raceway Toyota/Save Mart 350, Bank Of The West Classic and Aircel Chennai Open.
3
Score
Popularity
Activity
Freshness
Get Better and Faster