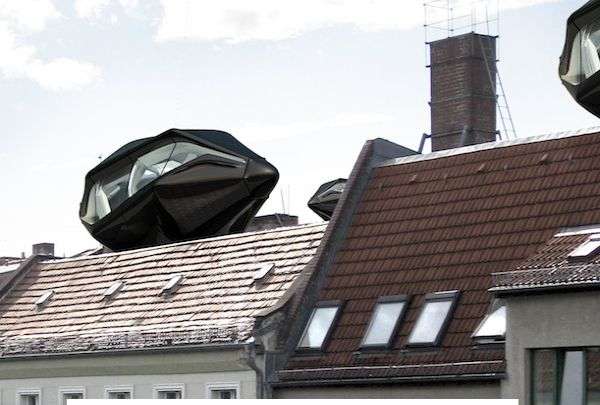 Michael Hines — May 4, 2011 — Art & Design
References: arch.nau.coop & bornrich
Share on Facebook Share on Twitter Share on LinkedIn Share on Pinterest
Rooms on the top floor of hotels are often the most luxurious and lavish, but what about rooms on the roof? Typically, they are nonexistent, but NAU is trying to change that with the Living Roof. The Living Roof is a luxurious mini-pod designed for the roofs of hotels.

The Living Roof is self-sustaining, featuring wind turbines and photovoltaic panels that provide all of its power. Even the water systems are self-sustaining as they source rain water from outside. NAU envisions these hotels in different locations throughout the world's major cities, with the locations changing every two years in order to keep things fresh. Rooftop hotel pods are nothing new -- London will have its very own during the 2012 Summer Olympics -- but luxury rooftop hotel pods that are self-sustaining haven't been seen before. It won't be long now before the top rooms at hotels become budget suites. The real party's on the roof, people.
4.2
Score
Popularity
Activity
Freshness
Get Better and Faster