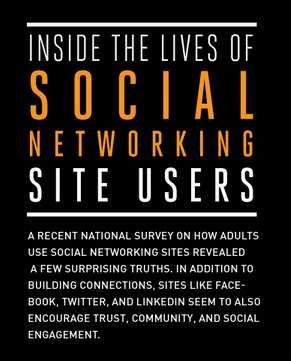 The 'Lives of Social Networking Site Users' Infographic is Wary

Jennifer Gosnell — June 13, 2012 — Social Media
References: columnfivemedia
Share on Facebook Share on Twitter Share on LinkedIn Share on Pinterest
The 'Inside the Lives of Social Networking Site Users' infographic displays the average characteristics of certain types of online media sites. For instance, across the board, social media users are most likely to be between the ages of 23-35, but other popular age ranges are 36-49 and 50-65.

People who actively engage in the use of the Internet and social media sites agree that other users can be trusted; whereas only 27 percent of non-Internet users can say the same. For people whose concerns about joining a social site include a fear of becoming shut-ins, high percentages of people who joined networking sites actually went out and became more involved in activities, volunteer jobs and religious organizations.

Ultimately, this graph found that Facebook users are the most trusting for one very simple reason: most of their "friends" are people they know and have accepted into their private circle.
1.5
Score
Popularity
Activity
Freshness
View Innovation Webinars