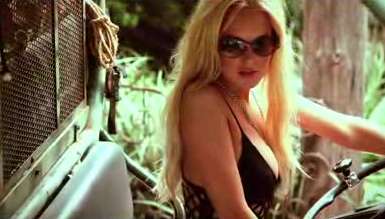 Allison Love — July 19, 2010 — Pop Culture
References: gq-magazin.de & cocoperez
The newest Lindsay Lohan German GQ photo shoot is scantily clad. The actress, who is set to serve a 90-day prison sentence for breaking her probation, is featured in the German magazine wearing next to nothing and looking mighty sultry in the photos.

Once upon a time, Lindsay was a very successful Disney child star and has since been in several Hollywood blockbusters. The actress is known to be a regular on the Hollywood scene, but she’ll be taking a break in the next month to serve her prison sentence. Regardless of the hoopla surrounding her sentence (and court appearance), she looks pretty fierce in the Lindsay Lohan German GQ photos!
5.3
Score
Popularity
Activity
Freshness