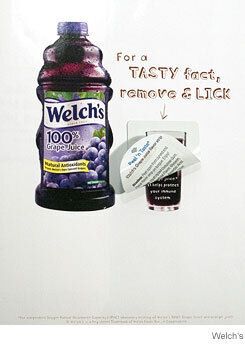 Similar to perfume ads that have panels you pull back to offer a hint of the fragrance, Welch's is launching tabs in this month's edition of People magazine in the form of a one page print ad that let the customers peel to taste.

Image when kids start to offer their friends a taste. Imagine the problems this could pose in the waiting room of a doctor's office...

"If someone doesn't rip off the whole sticker, First Flavor says, the flap can't reseal, giving people an easy way to know whether the ad has already been licked," the WSJ reported. I guess they've got all bases covered.

The idea is fantastic, but parents are still going to have to start watching out!

The ad was created by First Flavor who has launched other taste campaigns to test everything from pepperoni pizza to soy milk and flavoured kid's cold medicine.

"In some lickable ads, including the Welch's ad, some of the essence of the actual product is added to the strip, while in others, the strip is made up of unrelated flavors, both natural and artificial," the WSJ wrote.
5.4
Score
Popularity
Activity
Freshness
Attend Future Festival