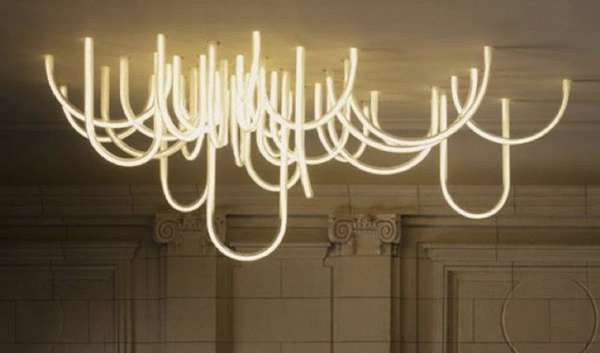 Les Cordes by Mathieu Lehanneur is Inspired by Ropes of Light

Meghan Young — July 4, 2013 — Art & Design
References: mathieulehanneur.fr & fubiz.net
Share on Facebook Share on Twitter Share on LinkedIn Share on Pinterest
The Les Cordes light fixture is visually striking. Instead of taking on even a semblance of a traditional chandelier, it uses LED tubes in an artistically sculptural way to create an object that focuses as much on function as it does on form. Casting a warm glow, the Les Cordes light ensures that ambiance is also an important factor.

Created by Mathieu Lehanneur, a designer based in Paris, France, the Les Cordes light fixture is made out of borosilicate glass. As written by Lehanneur, "This chandelier was conceived as a rope of light crossing the ceiling, only bands of light and glass are visible. It is not an object. It is not a light fitting. It is the light itself that seems to live and circulate in the entrance space, as if stitched onto the building itself."
3.4
Score
Popularity
Activity
Freshness
Access Advisory Services