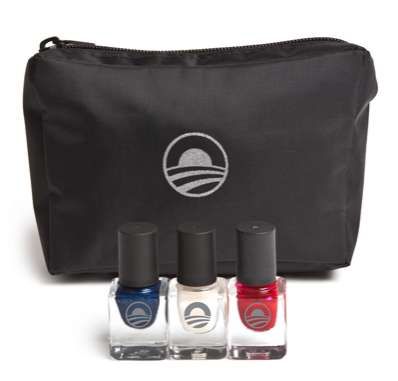 Jordy E — March 24, 2012 — Pop Culture
References: beautyhigh & refinery29
Share on Facebook Share on Twitter Share on LinkedIn Share on Pinterest
The Obama campaign trail will be embarking upon a rather feminine route this year with Le Métier De Beauté's new patriotic line. As was instructed by the Obama administration last year, the company was to create a set of red, blue and white shades under the supervision of Le Métier De Beauté co-founder Richard Blanch.

The Obama nail polish set cost the political campaign an alleged $10,000 to produce, and has placed many women on either side of the fence. Sold in its entirety for $40, some have welcomed the product, while others have deemed it an insult to the country's most pressing women's issues.

Whether or not one supports Le Métier De Beauté's Obama nail polish line, this direction in campaign loot is irrefutably new, and is specifically tailored to suit a female audience. The public response to this gender-specific swag will soon be heard.