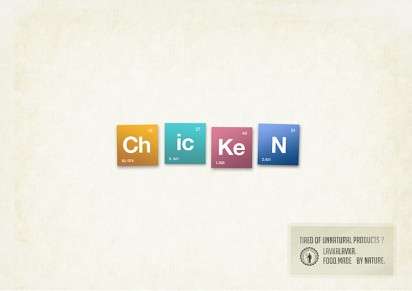 The LavkaLavka Food Made By Nature Campaign is Clever and Simple

Meghan Young — November 27, 2012 — Lifestyle
References: facebook & ibelieveinadv
Share on Facebook Share on Twitter Share on LinkedIn Share on Pinterest
The LavkaLavka Food Made By Nature ad campaign has cleverly strung together elements from the periodic table to spell out the words beef, chicken and potato. The images, which accompany the tag line, "Tired of unnatural products?", show that such foods can often be grown in a scientific lab rather than naturally at a farm as they should.

Created by Creative studio, an ad agency based in Russia, the LavkaLavka Food Made By Nature ad campaign simply and effectively gets its point across, at least to those familiar with the tabular display of the chemical elements in the periodic table. Granted, there is a good chance that these particular elements don't exist in real life.
3.1
Score
Popularity
Activity
Freshness
View Innovation Webinars