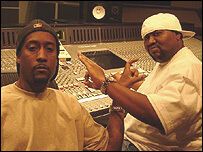 Jon Nokes has invested more than US$1 million in the project already, searching the streets for new talent and holding auditions.

"Ideologically it's rescuing as many kids as you can from the inner city 'hoods," says Mr Nokes.

And in terms of business, it's a bold way to find genuine talent and produce music with real street cred.

"We showed them love and we showed them an opportunity," added Robert Lewis, an exec with Reputable Records and one of the project's organizers.

Interested rappers mainly heard about the auditions through word-of-mouth. More than 200 came forward to audition, and most were members of either the Bloods or the Crips. Strict rules banned any weapons or violence at the auditions.

"It's almost like basketball," Stanton explained. "A lot of talent comes out of the 'hood and it's just a process of going through the individuals and seeing who's head is right and who's willing to compromise one lifestyle for another lifestyle and buckle down and really get serious."

A complilation CD has already been released featuring the best talent from the auditions, and a DVD documenting the process will be released soon.
4.2
Score
Popularity
Activity
Freshness
View Innovation Webinars