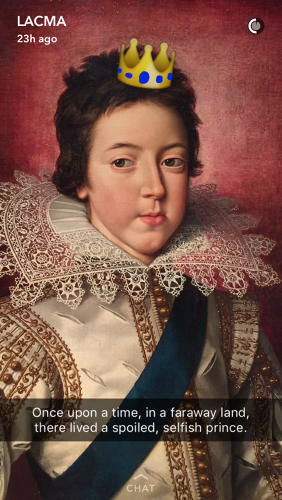 In order to do so, the LA County Museum of Art encouraged its visitors to interact with the classical works of art it had on display by using Snapchat. Composing the idea through a partnership with Disney, which will occur as a bi-monthly event, the museum took two days to lens pieces that would tell a condensed version of the story -- quoting its most recognized lines and using the drawing tool that's included within the app to transform the works to its liking.

In addition to appearing on the LA County Museum of Art's Snapchat account, @LACMA, the humorous retelling was shown on the @OhMyDisney account as well -- resulting in over 30,000 views and 2,000 shareable screenshots on Disney's alone. Through this campaign, the two help to increase Millennial and Generation Z participation by connecting to them through a medium they frequently use -- exposing what it has to offer while framing it way that makes it more accessible to them.
3.4
Score
Popularity
Activity
Freshness
Jeremy Gutsche Keynote Speaker