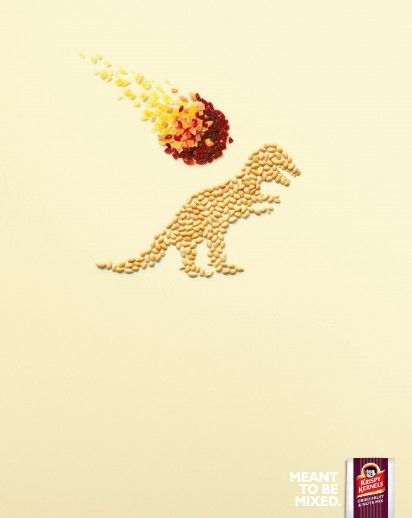 Meghan Young — January 9, 2014 — Marketing
References: lg2 & ibelieveinadv
Share on Facebook Share on Twitter Share on LinkedIn Share on Pinterest
The Krispy Kernels Dried Fruit & Nuts ad campaign may depict some rather destructive scenarios, but it is all in the name of harmony. As its tag line reads, "Meant to be mixed," the fiery meteor made up of fruits and peanut dinosaur are on the brink of colliding for a good, actually delicious, cause. Same with the dried fruit dynamite and nutty robot.

Conceived and executed by Lg2, an ad agency based in Quebec, Canada, the Krispy Kernels Dried Fruit & Nuts ad campaign was art directed and illustrated by Vincent Bernard with creative direction and copy writing by Luc Du Sault. Adhering to an otherwise minimalist poster aesthetic, the ad campaign might not inspire hunger right away, but it will encourage imaginations.
3.5
Score
Popularity
Activity
Freshness
View Innovation Webinars