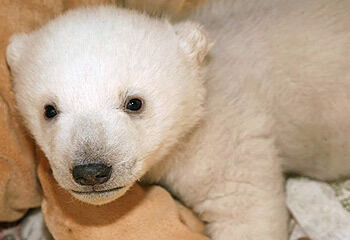 Lauren G — March 23, 2007 — Lifestyle
References:
Notice: Undefined index: host in /home/jeremy/public_html/thcp/core/core.functions.php(637) : eval()'d code on line 3
Share on Facebook Share on Twitter Share on LinkedIn Share on Pinterest
KNUT the polar bear cub won hearts on trendhunter earlier this week after it was reported activists wanted to have him killed. Now he has his own video podcast and photographer of the stars Annie Leibovitz came to take his portrait. Knut will also star in a TV series documenting his life on Berlin's RBB public television station starting on Sunday. The fuss over Knut continued today with the country's largest newspaper, Bild, publishing a Knut poster, matched by Berlin's own B.Z. tabloid. Now, his handlers are working on an eagerly awaited debut before the clamouring public.

The Berlin Zoo's baby bear is the German capital's hottest celebrity at the tender age of 15 weeks. Thus far he has endeared himself through pictures on the zoo's web site and in newspapers showing him gnawing a brush and wrestling with a soccer ball.

"I think that people will be able to see the bear by this weekend,'' Andreas Ochs, a veterinarian with the Berlin Zoo said on N-24 television, noting that he would have to be shown with his handler and only for brief periods throughout the day. "Certainly, the public is going to have to be patient, as there will be a huge interest,'' Ochs said.