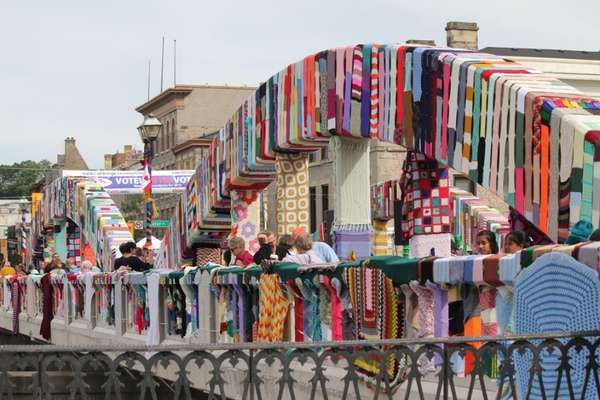 Hundreds of knitters from all over the world have had their needles busy over the past months creating the swaths of material used for the bridge blanket. Stripes, squares, skulls, flowers, giant socks and even knitted Canadian flags wrap the four concrete arches, railings and light posts on the heritage bridge that crosses the Grand River. It took over 16,000 zip ties to join all of the pieces.

The KNIT camBridge project, conceived by local artist Sue Sturdy, was intended to remind the residents of Cambridge of the area's connection with the textile industry.

When the work is dismantled at the end of the month, the knitted pieces will be professionally cleaned and tweaked into scarves and blankets. Most will be donated to the needy and others will be auctioned off for the Cambridge Center for the Arts.

I captured these photos during the grand opening.
6.4
Score
Popularity
Activity
Freshness
Get Better and Faster

Art Wrapped Architecture
'Louis Vuitton: A Passion for Creation' on Side of Hong Kong Museum