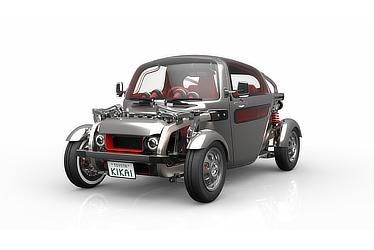 Rahul Kalvapalle — October 13, 2015 — Autos
References: newsroom.toyota.co.jp & blogranddriver
Share on Facebook Share on Twitter Share on LinkedIn Share on Pinterest
The Kikai concept, brought to you by Japanese automaker Toyota, is just one of three incredible concept cars being shown off by Toyota in Tokyo. This particular vehicle looks an awful lot like an adult version of the Camatte toy car project. The Camatte models were designed to give children an appreciation for the workings of automobiles, and in a way the Kikai seems to be doing the same for adults -- after all, its peeled-off body work reveals all the inner parts at work.

Toyota says that the Kikai concept vehicle was ultimately designed to "explore and emphasize the fundamental appeal of machines: their fine craftsmanship, their beauty, simplicity, and their fascinating motion," going on to point out that this is one vehicle that "reminds us of the appeal of the physical and tactile in a digital age.”
6.7
Score
Popularity
Activity
Freshness
Jeremy Gutsche Keynote Speaker