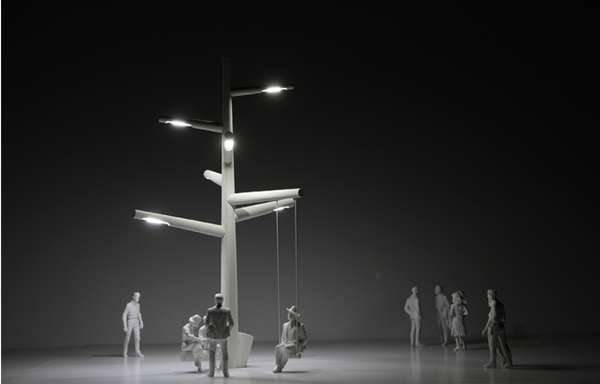 Amelia Roblin — September 5, 2011 — Eco
References: kibisi & ecofriend
It's all well to employ biomimicry in the design of functional objects, but it's a rarity to then interact with such creations in any way resembling the organic original's use. These solar KiBiSi Street Lights do not use the tree's form in vain, and rather playfully explore the range of fringe functions that the concept could incorporate.

For example, the branching streetlight structure does not have lamps installed on every angular bough, as the odd one is reserved for the suspension of a swing. The industrial form is then instantly transformed into a whimsical urban object, affording a unique environment for social and infrastructural interaction.

A second stump can be fixed as another offshoot to KiBiSi sTREEt Lights which becomes an integrated garbage can. It's refreshing to see the complexities of this design being explored with such imagination.
5.8
Score
Popularity
Activity
Freshness