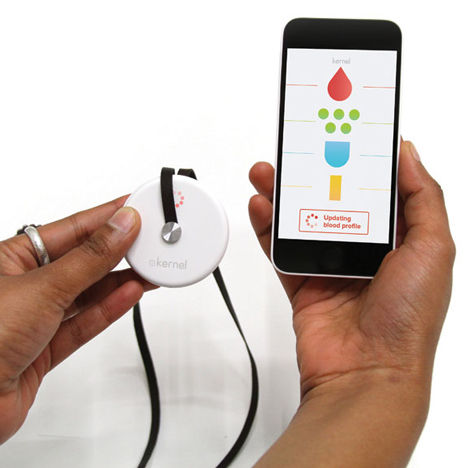 Kernel of Life is Designed to Diagnose Diseases in Rural Areas

Michael Hines — December 3, 2013 — Lifestyle
References: fuseproject & dezeen
Share on Facebook Share on Twitter Share on LinkedIn Share on Pinterest
Kernel of Life is designed to leverage the power of smartphones and the cloud to let those in rural areas test themselves for diseases. Created by the San Francisco-based Fuseproject, Kernel of Life is designed to test for disease in four different ways: breath, saliva, blood and urine. The device sends the results to your phone via Bluetooth. Your results can be sent to a remote doctor who can provide treatment advice, in addition to a diagnosis.

Kernel of Life is primarily designed to treat illnesses in the developing world, such as malaria. The pad is divided into four quadrants (for the four different sample types) and, when closed, a built-in sterilizer cleans the test pads. Fuseproject says that the technology to build Kernel of Life is available now, but that it's too expensive for mass production. However, costs are expected to drop precipitously in around five to 10 years, making Kernel of Life a concept that could very well become reality sooner rather than later.
2.3
Score
Popularity
Activity
Freshness
Get Better and Faster