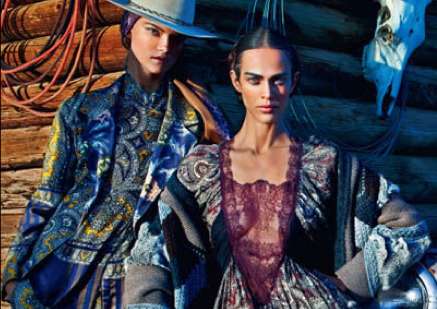 The Kenzo FW11/12 Campaign Brings Pattern to the Planes

The elaborate garments themselves look undoubtedly influenced by the heavy layered and assembled dresses and suits of the 19th century American West, but the textiles used are remarkably different. An interest in pattern and texture prevails, but with cross-cultural ornamental shapes and the means of modern full-bodied pigments, these full-length long-sleeved gowns and elaborate and structured posterior suits bring an unfamiliar element to the log cabin homestead sets.

Despite being completely covered up in these Mario Sorrenti photographs, models Kasia Struss and Aymeline Valade exude a timeless exquisiteness beside the dapper cowboy Clement Chabernaud. The Kenzo FW11/12 campaign presents the illusion of a much older aesthetic, born of an era that could have come no sooner than the present.
4
Score
Popularity
Activity
Freshness

Country Kid Editorials
'Once During the Sunset' Captures Field-Frolicking Children