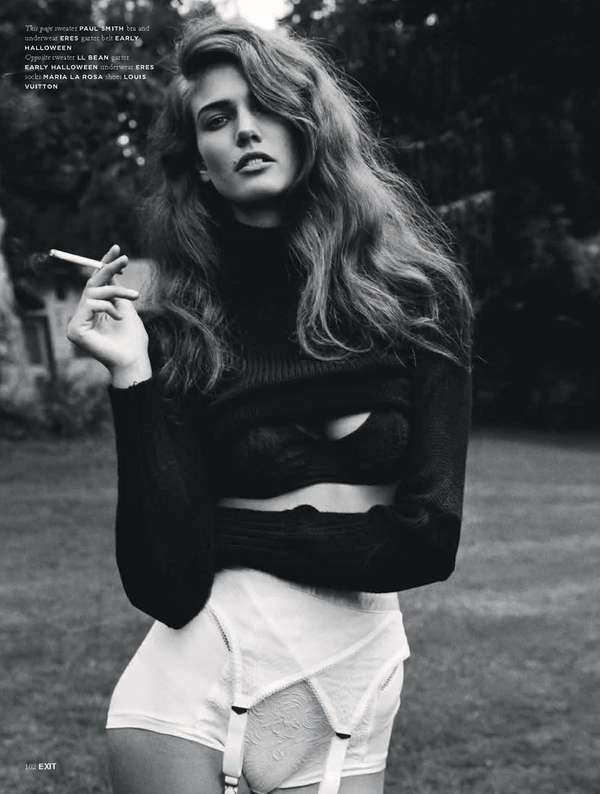 Souzan Michael — December 8, 2011 — Pop Culture
References: nymag & fashiongonerogue
Share on Facebook Share on Twitter Share on LinkedIn Share on Pinterest
It seems that the Kendra Spears by Benny Horne for Exit F/W 2011 photoshoot is taking a cue from another famous Ms. Spears, who years ago debuted a music video where she now infamously wore her underwear on the outside of her clothing.

While the photo shoot for Exit Magazine's F/W 2011 issue will certainly not be as talked about as Britney's clothing choices, it certainly is just as sultry.

Twenty-three-year-old American model Kendra Spears wears fall knits by some of the top designers in the world, such as Paul Smith, Ralph Lauren, Tom Ford and Jill Stuart. Styled by Melissa Ventosa Martin, Spears looks sophisticated and refined, while at the same time looking like a sexy young Cindy Crawford.

The Kendra Spears by Benny Horne for Exit F/W 2011 photoshoot might not boast the most practical clothing choices, but it certainly is easy on the eyes.
5.9
Score
Popularity
Activity
Freshness
Get Trend Hunter Dashboard