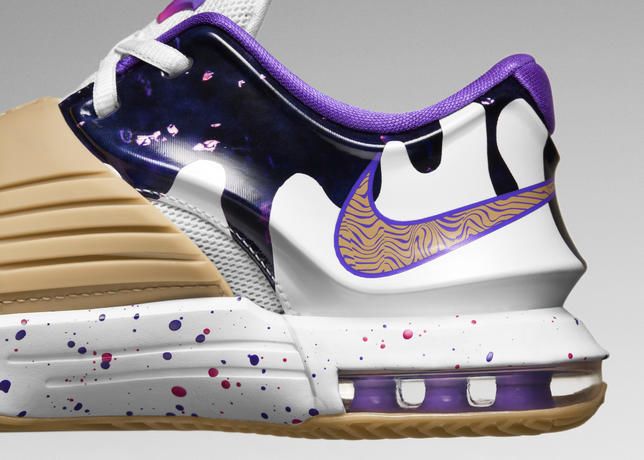 Rahul Kalvapalle — February 24, 2015 — Fashion
References: news.nike & sneakerbardetroit
Share on Facebook Share on Twitter Share on LinkedIn Share on Pinterest
The KD7 PB&J is a shoe inspired by last year's NBA MVP Kevin Durant's go-to childhood snack, the humble peanut-butter-jelly sandwich. The shoe is the second of a three-shoe Nike Snack Attack, and follows hot on the heels of the KYRIE 1 Cereal Snacks.

Durant says much of his childhood exploits were fueled by PB&J, whether on the basketball court or while hanging around with friends in the neighborhood. "Actually, PB&J is still my go-to snack and it's cool to have a KD7 that takes that part of my story to a new level for kids," Durant says.

In addition to top-notch performance features, the KD7 PB&J features a delightful design with swathes of peanut butter tan and blobs of grape jelly purple.

Nike is without a doubt taking athlete-endorsed footwear to the next level by coming up with shoes that don't merely bear the athlete's name or jersey number, but bear design hallmarks inspired by their personal stories.
6.3
Score
Popularity
Activity
Freshness
Get Trend Hunter Dashboard