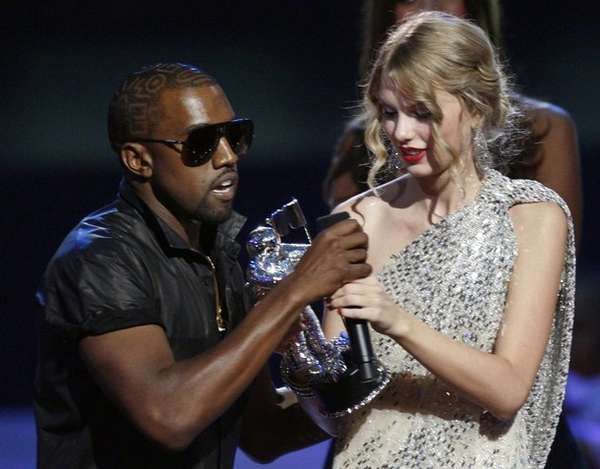 Kanye West has a long history of throwing tantrums at award shows when he doesn’t win. But the funny thing is that he was not up for this award, since you know, he is not a female. Kanye West felt that Beyonce should have won for her ubiquitous “Single Ladies (Put a Ring on It)” music video.

“Taylor, I’m really happy for you, and I’m gonna let you finish, but Beyonce had one of the best videos of all time,” said Kanye West as he took the microphone away from the 19 year-old Swift.

Beyonce won the more prestigious Video of The Year award for her ‘Single Ladies’ later in the evening, and she was gracious in giving Taylor Swift a chance to redo her acceptance speech.

“I remember how excited I was,” explained Beyonce of winning her first VMA at age 17 as part of Destiny’s Child. “I’d like Taylor to come out and have her moment.”

Kanye West later took to his blog to apologize, in his usual capital letters style, “I’M SOOOOO SORRY TO TAYLOR SWIFT AND HER FANS AND HER MOM. I SPOKE TO HER MOTHER RIGHT AFTER AND SHE SAID THE SAME THING MY MOTHER WOULD’VE SAID. SHE IS VERY TALENTED!”
5.3
Score
Popularity
Activity
Freshness
View Innovation Webinars