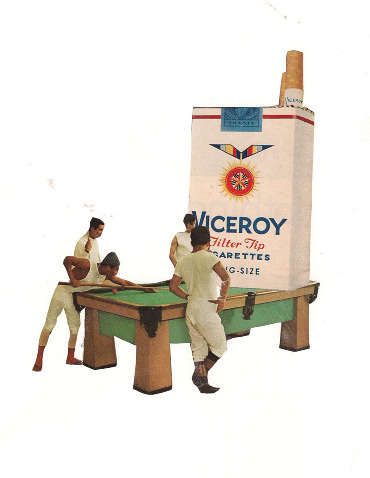 Jordan Sowunmi — December 26, 2012 — Lifestyle
References: cargocollective & cargocollective
Share on Facebook Share on Twitter Share on LinkedIn Share on Pinterest
Despite the obvious and deadly health issues it causes, smoking is a deeply entrenched (and in some circles, celebrated) part of our culture. The Jordan Clark World of Cigarettes series takes an important look into how and why we have come to accept cigarette use.

The Jordan Clark World of Cigarettes series features a group of illustrations that showcases several people engaging in benign, everyday activity (playing pool, dancing, standing on a podium) and sets a pack of cigarettes as the backdrop on which they stand, or positions it nearby.

By highlighting people participating in relatively innocuous activity with a cigarette pack looming ominously nearby, the Jordan Clark World of Cigarettes series captures the role that smoking plays in our society. It is permanent, pervasive, and at times, all-consuming. The images force smokers and non-smokers alike to reexamine their relationship with the destructive force of smoking, one that most people prefer to ignore.
3.1
Score
Popularity
Activity
Freshness
Get the 2021 Trend Report FREE