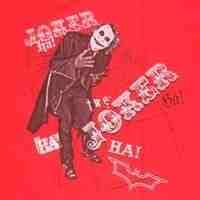 Cowbag — August 9, 2008 — Pop Culture
References: slashfilm
Where there is a film, there is shed loads of merchandise. This is certainly true of the The Dark Knight and of course Heath Ledger's performance.

Yep, Warner Bros and DC didn't hold back on the Heath Ledger merchandising which is a tad odd considering his death. Here are my top 10 Joker and Heath Ledger t-shirts.

Personally I think only a goth, emo or student could pull these off, but if I HAD to wear one, it would be the white faced image of Heath Ledger. It is a bit scary, but if I had to wear it, then at least I would not have to look at it.