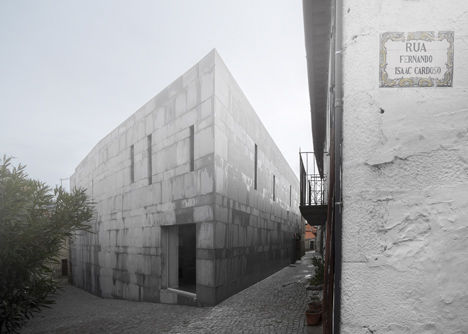 The Jewish Cultural Center is a Modern Take on Solidity

Tiffany — January 25, 2014 — Art & Design
References: dezeen
Share on Facebook Share on Twitter Share on LinkedIn Share on Pinterest
Lisbon-based architecture and design firm Gonçalo Byrne Arquitectos has collaborated with design studio Oficina Ideias em linha in the construction of a Jewish cultural center called the Center for Interpretation of Jewish Culture Isaac Cardoso. The site lies on a corner of the historical part of the city of Trancoso in Portugal.

The historical district is determined by its narrow, cobbled medieval streets, formerly known as Trancoso's Jewish district. The exterior structure of the building is layered in what seems like a random arrangement of pieces of granite with windows that take the form of narrow slits.

On the inspiration of the structure, the architects said, "Starting from a ruined allotment, the aim was to re-erect a building that reinforces the corner geometry, still displaying an acute angle on the intersection of two narrow streets, and establishing a symbolic gesture in the context of Jewish urban culture."
0.9
Score
Popularity
Activity
Freshness
Jeremy Gutsche Keynote Speaker