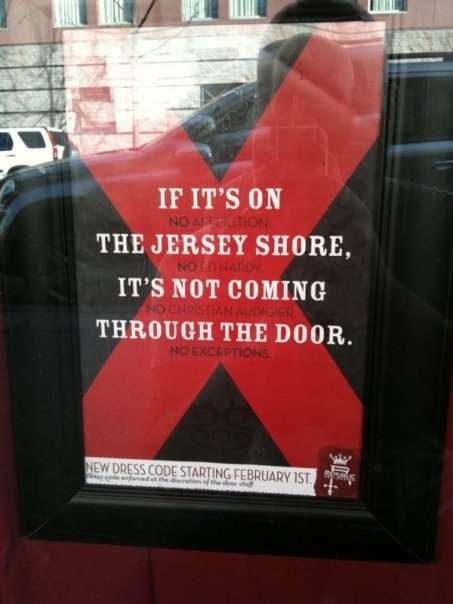 Marissa Liu — February 27, 2010 — Lifestyle
References: buzzfeed
Share on Facebook Share on Twitter Share on LinkedIn Share on Pinterest
Are you sick of going to bars only to be swarmed by a gaggle of guidos and guidettes? With the popularity of the reality show 'Jersey Shore,' people actually think orange fake tan, boob-baring cleavage shirts (and we're not talking about just for the girls), Ed Hardy and three-sizes-too-small clothing is an appropriate look. Well, Republic, a bar in New Orleans, has decided enough is enough and has taken it upon themselves to institute a Jersey Shore ban.

What is a Jersey Shore ban, you may ask. Well, a sign at the front of Republic clearly states, "If it's on the Jersey Shore it's not Coming Through the Door." Now that's a dress code we can get behind.
6.7
Score
Popularity
Activity
Freshness
Get Better and Faster