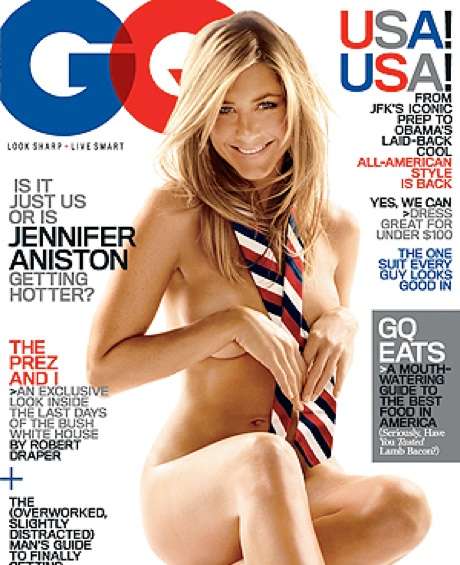 In the GQ Magazine interview, Jennifer Aniston discusses ‘Pumas,’ a movie she’s developing that she describes as a “sort of a female ‘Wedding Crashers,’” as well as two other movies, ‘Marley & Me’ and ‘He’s Just Not That Into You,’ which are set for release in December and February, respectively.

As we’ve come to expect from Jennifer Aniston’s recent interviews, the actress shares more than her nude body with the red, white and blue necktie and answers still more questions in reference to the public’s unending fascination with the subject of her relationship with ex-husband Brad Pitt: “The funny thing is that people don’t realize we all go away to the Hamptons on the weekends… No. But can you imagine? That’d be hysterical: I’ve got Zahara on my hip, and Knox...”

The first four images in the gallery are part of Jennifer Aniston’s GQ Magazine spread.
6.1
Score
Popularity
Activity
Freshness
Get Better and Faster