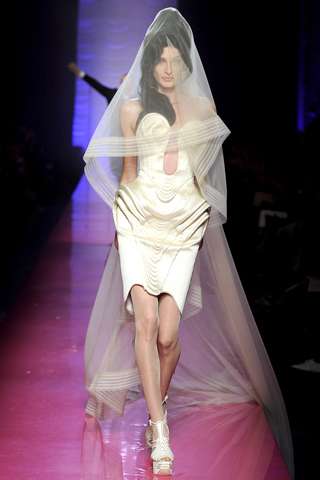 The legendary French designer paid tribute to the deceased crooner in his latest couture show in more ways than one. Four acapella singers kicked off the show by singing her most popular song, the Grammy-winning 'Rehab.'

Ms. Winehouse was remembered through the models and clothing, too. Beehive hairdos in black, blond, red and pink, thick winged eyeliner, and 50s and 60s-inspired lace pieces and chic pencil skirts all screamed Amy.

Finally, as the singer's dark and moody hit 'Back to Black' played during the finale, the models strutted their stuff down the runway while covering their faces with lace veils.

Not only was the Jean Paul Gaultier Spring 2012 Couture show beautiful, but it was also a touching tribute that will surely go down in Haute Couture Week history.
5.9
Score
Popularity
Activity
Freshness
Access Advisory Services