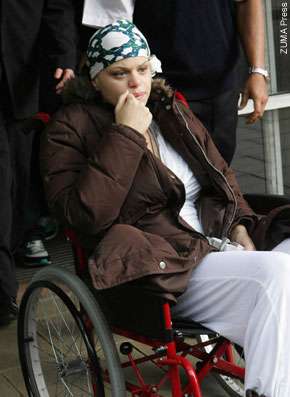 Bianca — February 20, 2009 — Pop Culture
References: nypost
In a reality show first, Jade Goody is going to have cameras follow her in her last weeks of life. After having her life documented by the media over the last seven years through reality shows, Jane Goody is willing to die on camera for a multi-million dollar deal for the world to watch.

“I know some people don’t like what I’m doing, but at this point I really don’t care what other people think,” Jade Goody told the News of the World. “Now, it’s about what I want.”

She added, “Yes, people will say I’m doing this for money, and they’re right, I am. But not to buy flash cars or big houses. It’s for my sons’ future if I’m not here.”

“If cancer has taught me anything, it’s that big houses aren’t important, being rich isn’t important. It’s my sons who are important, it’s being alive that’s important,” Goody said.

This story is likely to pick up a lot of buzz and raise substantial debate: is airing Jane Goody’s death distasteful, or is it a much-needed dose of authentic reality?
3.1
Score
Popularity
Activity
Freshness