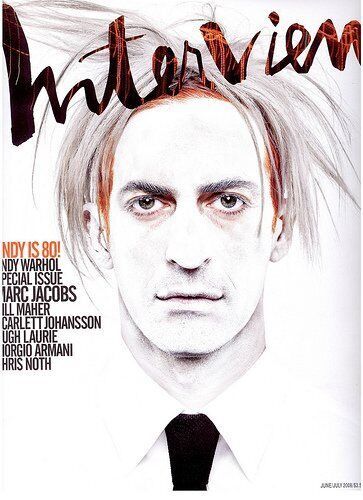 The special feature is a celebration of Andy Warhol's 80th birthday anniversary and shows Marc with heavy make-up, big tranny eyelashes, high heels and funky comic-cartoon hair. I almost wish Victoria Beckham would show up in one of the photos in a Marc Jacobs bag!

Andy Warhol would be proud of the quirky art direction.

After losing weight, Marc Jacobs has broken from his shell and has been featured in numerous magazines and fashion shoots, mostly without much clothes. Check out a photo shoot of fellow fashion designer Tom Ford, sans clothes as well, in the recent issue of Prestige, Hong Kong magazine.