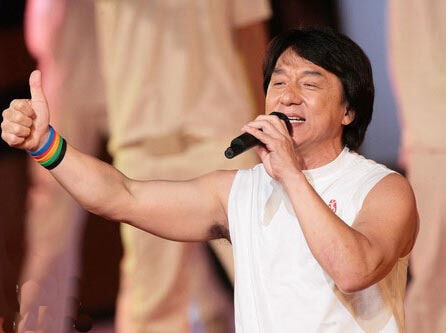 The song, We Are Ready, is officially endorsed by the 2008 Summer Olympic Games, and Chan wrote on his blog that the jingle will serve as a count down to the games next August.

Chan didn't write the song, Peter Kam did, but Chan takes credit for the vocals on the Chinese tune, and he'll be heralded for the English version he hopes to product next. The Chinese version has already become a huge hit, with over 100 pop stars doing their own remakes already.

"Waiting year after year/ We can see into the future/ Together with hard work and sweat/ We've created the five different colours," a part of the tune translates to.

This past August, Chan attended the official event marking the one-year countdown, blogging about the experience after.

"During this public appearance, I actually had goose bumps on my arms," he wrote.

"The ceremony made me very emotional and I said to myself, 'That's our China, that's our day!'

Much to the surprise of many, this isn't his musical debut. Chan has recorded several albums in the past.

Be sure to check out the clip from his live performance... he gets pretty into it!
2.5
Score
Popularity
Activity
Freshness
Get Trend Hunter Dashboard

43 Positive Things About the 2008 Beijing Olympics