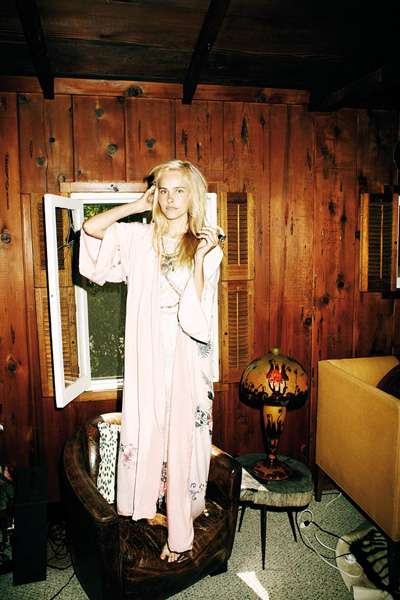 Marie C. Hudson — October 17, 2011 — Pop Culture
References: asos & designscene.net
Share on Facebook Share on Twitter Share on LinkedIn Share on Pinterest
There's no better way for a celebrity to show off their looks than with a fresh-faced photoshoot, which is exactly what you'll find in the Isabel Lucas Asos November 2011 issue. The Australian actress, who you might recognize from Transformers: Revenge of the Fallen, Daybreakers, and The Pacific, showcases her natural beauty in the magazine's 'Shake It Up' editorial lensed by Jason Nocito.

Shot in the Laurel Canyon neighborhood of Los Angeles, Isabel looks perfectly at home in a wooden cabin and outdoors, posing under the leaves of a tree for a breathtaking monochromatic shot. In retro 70s-inspired fashion, the actress looks like she was pulled straight out of a hippie tour bus, with a rockstar-meets-bohemian vibe written all over her.

Whether you're already a fan of the actress, or you're yet to discover her acting talent, the Isabel Lucas Asos November 2011 editorial can't be missed!
2.3
Score
Popularity
Activity
Freshness
Access Advisory Services