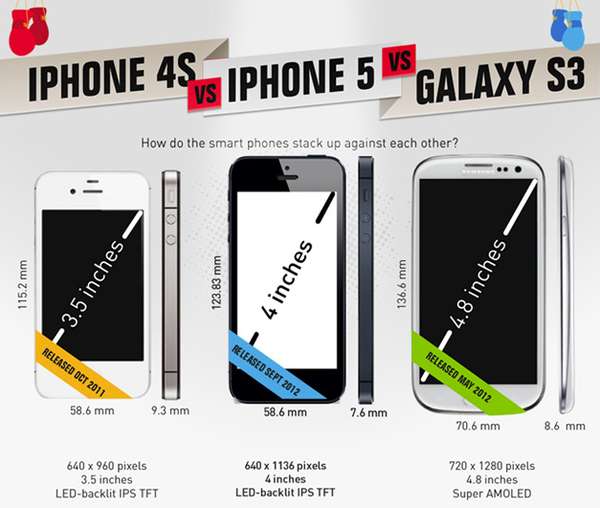 The New iPhone 5 Doesn't Seem to Offer Any Big Changes

A lot of Apple fanatics are slightly disappointed with the new iPhone 5 release and feel as though Apple is just playing catch-up with the competition. The above infographic takes an in-depth look at some of the key features of the iPhone 4S, the new iPhone 5 and the Galaxy S3.

Some main points to look at are the individual sizes of the smartphone screens, which ranks the Galaxy S3 at having the biggest screen at 4.8 inches. The cameras on each phone also vary when it comes to the secondary camera, which also ranks the S3 at having the most megapixels. Lastly, the S3 phone has a longer battery life and lasts for up to 11 hours of talking time, compared to the iPhone 5's eight hours.

Based on all the features listed, which smartphone will you buy and does the new iPhone 5 seem all that much better?
6.6
Score
Popularity
Activity
Freshness
Get Better and Faster