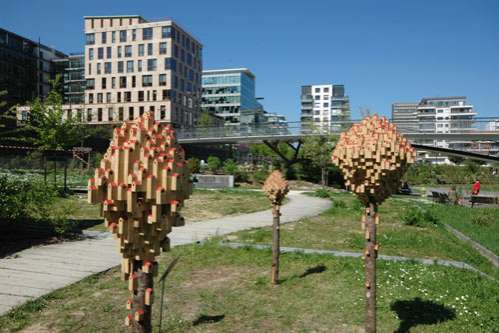 Meghan Young — April 19, 2011 — Lifestyle
References: vaulotdyevre & design-milk
In an effort to promote and grow biodiversity in urban cities, the Insectopia by Vaulot&Dyevre sculptures are an interesting set of insect 'hotels' that bugs can now take refuge in. Located in Paris, France, they look essentially like large birdhouses created in such a way as to mimic hives.

Designed specifically by Atelier Seewhy, Bruno Clanet and Jean-Kanora You, the Insectopia by Vaulot&Dyevre bug homes were commissioned by the mayor of the 13th district. A curious installation, it not only encourages life on all levels, it also adds an interesting focal point in this part of the city.

In fact, the Insectopia by Vaulot&Dyevre bug homes will surely encourage people's imaginations as they see little lives thriving within. To me, it's like a real-life Pixar film.
1.4
Score
Popularity
Activity
Freshness