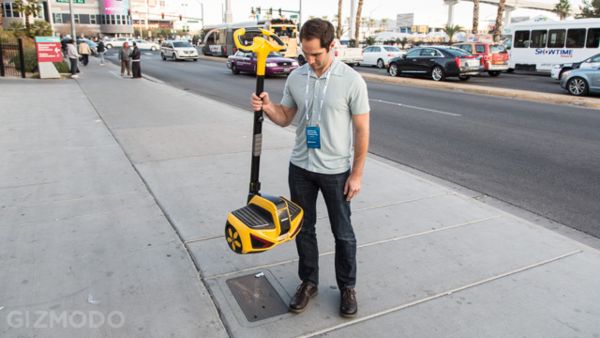 The InMotion SCV R1EX was Released at CES 2014

Ashley Noelle Lesiak — January 10, 2014 — Tech
References: imscv & gizmodo
Share on Facebook Share on Twitter Share on LinkedIn Share on Pinterest
If you've always thought of getting a Segway, but are not sure if it's worth the money or space, the InMotion SCV R1EX is perfect for you. This model is smaller, cheaper and weighs less than the competition. While the other new Segway model is $6,500 and weighs 105 pounds, this smaller version only costs $2,500 and weighs 35 pounds. Even though it's smaller, it can still reach a speed of 9MPH and travel for 18 miles without a recharge.

Not only is it more economical, but the new InMotion SCV R1EX comes with a whole lot of perks. Recently launched at the Consumer Electronics Show 2014, the fun little transportation device can have its handle pop off for easier storage. It also comes with GPS and Wi-Fi, so that when you get the accompanying app, you can call it to you and it will come. As an added safety feature, it tells you when you are running low on power and if you are going too fast for your own good.
6.9
Score
Popularity
Activity
Freshness
View Innovation Webinars