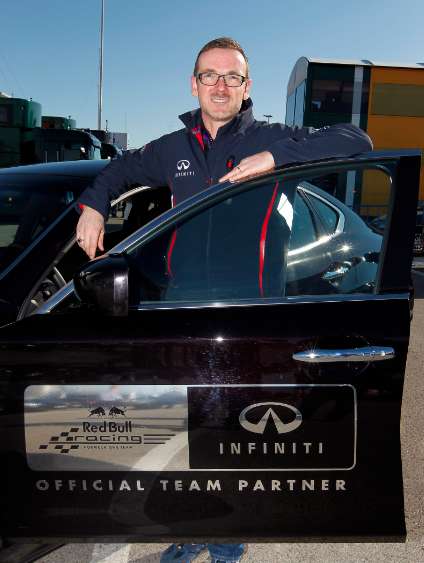 Before this, Sigl fantasized about growing up to be a landscape architect, but it turned out that once he saw the world beyond his home situated in a small town in Germany, he wanted to experience other experiences in other countries. A trip to Japan during an exchange program is what originally set Sigl on the course of working with Infiniti and Red Bull Racing and sparked his thirst for all things new and exciting.

Trend Hunter had the chance to sit down with Sigl and discuss Infiniti’s partnership with Red Bull Racing and how this has inspired innovation for the luxury Japanese auto maker.

Regarding the partnership entered by Infiniti and the Red Bull Racing F1 team, how is it different from anything else done in the Industry?

The old school way of creating the relationship was to build the car, build the engine and operate the team; that had been done with more or less success by other players. Coming in as a smaller challenger brand, we thought that could not replicate this model, but we appreciated the platform, message and reach that comes out of it. So we turned it on its head. Instead of a fuzzy drink sponsoring an automotive brand, it’s the drink company making the car and operating the team and we, as Infiniti, come in to provide expertise to a championship winning team. Red Bull Racing is a challenger brand just like us. So it’s good chemistry between the team.

On the process side, F1 helps us move faster. Not just on the track, [but also] building and innovating a new car every day, ever week. Whereas Infiniti is a bit of a super-tanker. But on the other hand, we are a big global car design company with thousands of people across the globe, so we have something in the process side to bring here.

And then of course, there is the technology side. We opened up our most secret of places and said to Red Bull Racing, “Have a look, tell us what interests you and why. Is it some of our materials? Is it design? Where do you see opportunity?”

Some of the battery technology is incredibly interesting because the F1 teams can’t develop this themselves; it takes a billion dollar car company. It’s now something that Red Bull Racing is looking into because even today KERS (Kinetic Energy Recovery System) is used on F1 cars and this requires the knowledge of battery technology which we have.

Last year when Red Bull Racing was at the Japanese Grand Prix, we gave them the opportunity to come to our most secret lab, hidden away in a valley. It’s akin to the James Bond volcano in terms of secrecy since you have to go through a tunnel to get there. It houses 10,000 people and there you have all the future products and materials where people are designing years and years ahead [of their time].
3.8
Score
Popularity
Activity
Freshness
Attend Future Festival Virtual

Ken Blanchard, Co-Author of 'The One Minute Manager' (INTERVIEW)

8 Interviews with Entrepreneur Fellows
Including Dr. Jordan Kassalow, the Founder of VisionSpring