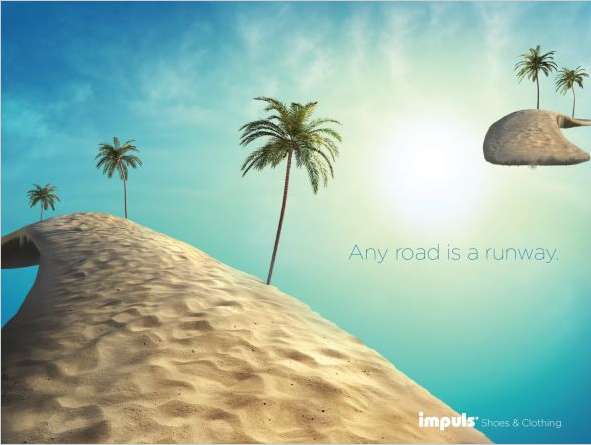 Amelia Roblin — June 19, 2011 — Marketing
References: lasociedad.mx & adsoftheworld
"Any road is a runway" according to this Impuls Clothing campaign, and though none of the brand's items are actually featured in these four ads, its up to one's imagination to see styles that would impress just about anywhere.

La Sociedad advertising agency of Monterrey, Mexico, put together these prints, which capture a variety of landscapes including a park path, a cobblestone road, an airport tarmac and a sandy beach. Instead of picturing such scenes in the way that may be familiar, the art directors elevated each passage or walkway into the air, broken off from the earth or water around it.

In establishing such a platform, the Impuls Clothing campaign turns such settings into fashion runways, suggesting that the wearer of such garments would exude catwalk couture no matter where she struts.
2.2
Score
Popularity
Activity
Freshness