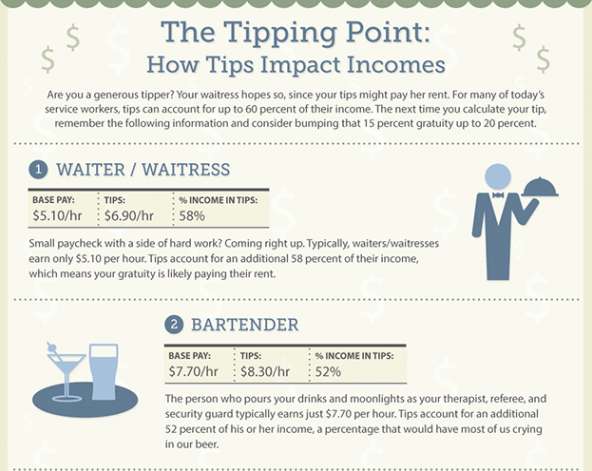 ‘The Tipping Point’ Covers the Importance of Tipping for

Erin Fox — December 12, 2012 — Special
References: payscale & visual.ly
Share on Facebook Share on Twitter Share on LinkedIn Share on Pinterest
The service industry covers a lot of the job market and often are not compensated the same amount as regular industries due to their ability to gain tips; however the importance of tipping is often forgotten about. When it comes to the service industry, waiters, bartenders, valets, taxi drivers, hairstylists, doormen and baristas are the top jobs that earn tips.

However, what people don’t recognize is that people don't often tip enough for these professions. According to this infographic, the two professions not tipped enough are baristas and doormen. These jobs are often thrown under the rug when it comes to recognizing them as a service. Waiters and bartenders often make more than 60% of their income off of tips.