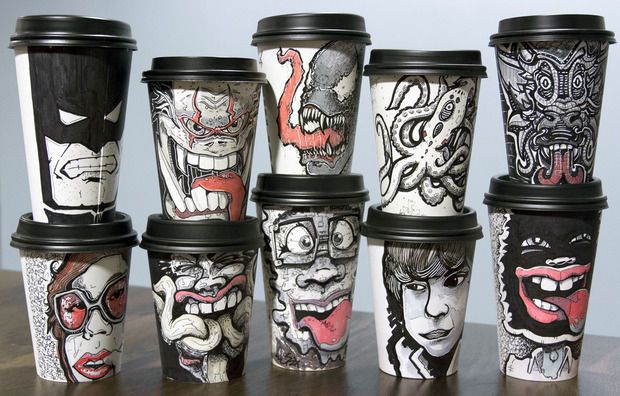 Meghan Young — September 16, 2014 — Lifestyle
References: projectnightnight.org & coolhunting
Share on Facebook Share on Twitter Share on LinkedIn Share on Pinterest
The common coffee cup has been given an artistic face lift thanks to a illustrator and professor of design, Miguel Cardona; his illustrated coffee cups not only decorates the vessels mundane exterior, they help raise funds for charity. Inspired by a range of subject matter from comic books to television shows and more, his unusual choice of canvas has helped donate baby blankets, children's books and stuffed animals to children in homeless shelters through Project Night Night.

The illustrated coffee cups were inspired by a random act by a barista, who tied a napkin around a cup, which became a scarf on a hipster character Cardona ended up drawing on it. In terms of his unusual material, he says, "You don't need a desk, it can be done anywhere, and to protect it, you can stack it in another blank cup. The cup itself can hold your art supplies and is itself, a display stand, it's quite the perfect design."
4.2
Score
Popularity
Activity
Freshness
Attend Future Festival