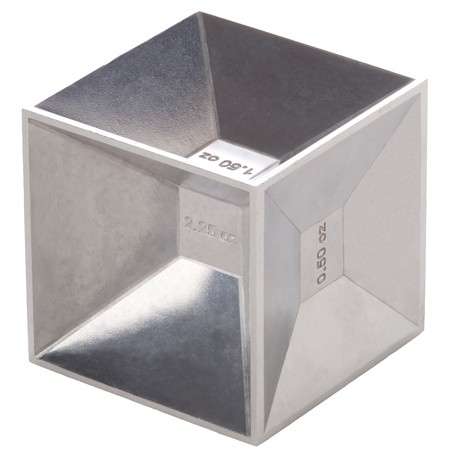 PinkVixen — September 30, 2007 — Lifestyle
References: unicahome
Share on Facebook Share on Twitter Share on LinkedIn Share on Pinterest
Well I'll be jiggered! Ever wondered how much of which liquor to pour into a drink? Some bartenders just seem to have a magical talent for this; well, that and years of practice. With the Kikkerland Cube, you can not only pour like a pro, but you can look stylishly clever as you do it! The little cube by designer Josh Owen is made out of aluminum and is marked at different points so you get the perfect measurements.

"The design of the Aluminum Cube Jigger evolved from an experiment to compress the six most common liquid measures used to mix alcoholic drinks, into the smallest possible dispenser," Owen said of his gadget. "The form was inspired by traditional box-shaped, Japanese sake cups, from which sake is sipped from the corners."

Kikkerland is Dutch for "frog land" which is another nickname for The Netherlands.
2.8
Score
Popularity
Activity
Freshness
View Innovation Webinars

44 Cubed Creations
Cutting-Edge Cubes, from Cube Living to Gyms in a Box